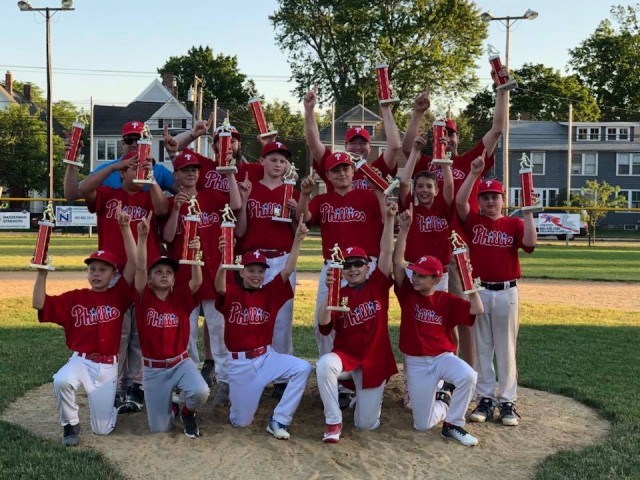 Come down to Murray Field tomorrow at 5:30pm for the Majors Championship Game, between the Red Sox and Phillies.  This is going to be a treat, folks - both teams are prepared to compete until the final out.  If the Red Sox beat the Phillies in Game 1, that means both teams will have 1 loss, and in a double elimination tournament, that means we play two!

Making things even more interesting - the Phillies were the team to send the Red Sox into the losing bracket - a 2-0 pitching duel!  This could end up being the ultimate grudge match.

There's plenty of room to drop a lawn chair in the outfield and areas surrounding the field - come on down and support some great baseball, in the shadow of Holman Stadium.

Royals 11 Giants 4 The Giants and Royals faced off for the third time this season, with the Royals coming out on top in this first round playoff game 11-4.  For the third game in a row, the Royals played superb defense, getting a late double play to help seal the victory. Trailing 4-3 in the top of the 5th, Ben Adamonis entered the game and drew a leadoff walk.  After walks to David Taylor and Gus Smiley, Chase O’Brien tied the game with a single to left field.  With two outs, the Royals were able to push across three more runs on an error on a ground ball hit by Cam Burgess, to take the lead 8-4. Jack Lobdell, Nick Kutschke, and Severan Johnson also contributed hits for the Royals offense. Brady Sullivan pitched for the Giants, throwing four innings, striking out four and keeping his team close.  DJ Whalen had two hits and Dawson Bolton walked twice to pace the Giants offense.

Cardinals 12 Diamondbacks 11
Brady Dillon pitched 4 innings to get the win. Griffin Davis got the save. Jake O'Connor got the loss for the Diamondbacks. Alex Landry , Mason Tanner and Ryder Clancy all reach based 3 time and scored 2 runs apiece. Jacoby Cassie scored twice and Dean Adams homered for the Diamondbacks.

Phillies 2 Red Sox 1
The Phillies edged the Red Sox 2-1 in a tight game that was down to the wire!